We recently completed a very large technical project: migrating a client from Salesforce over to HubSpot CRM. There was over a decade worth of data to migrate over, so it was a big project! We did it in 4 steps:

We integrated HubSpot and Salesforce together to start syncing most of their data between the two systems.

The integration defaults to preferring Salesforce data over HubSpot data, but the client wanted to start working in HubSpot alongside Salesforce, so we changed all the property mappings from “prefer Salesforce” to a two-way HubSpot-Salesforce sync instead.

This was the biggest step by far! One big thing that we had to change was that the HubSpot-Salesforce sync set the create date in HubSpot of all the synced deals/opportunities to the day the integration was enabled (June 2022).

We did this by doing a spreadsheet export of all the HubSpot deals, including their Deal IDs. Next we exported all their Salesforce opportunities with create dates into a separate spreadsheet.

The next part of the data cleanup was fixing any sync errors arising from bad data in the system. After 10 years of use by multiple employees, there was a lot of data errors that had accumulated!

Missing contact owners, inconsistent state/province/country naming, and bad email addresses were the most common sources of integration errors. Systems integrations have a way of revealing all the bad data that had previously been sitting undetected in a company’s systems.

Finally we got all the various data cleanliness issues resolved and we got the “all-clear” in the HubSpot-Salesforce integration dashboard (see screenshot below).

There were about 12 custom reports on a dashboard in Salesforce that we needed to replicate in total. The reports were primarily tracking quantity of deal stages and sales activities (demos, order forms, etc.) monthly. HubSpot’s report builder and dashboarding tools have improved substantially over the last few years to the point that it’s now near feature-parity with Salesforce.

So we were able to replicate most of the reports almost verbatim, though we did need to make a few changes to account for differences in object architecture between the two platforms.

(All chart labels here have been redacted for privacy purposes) 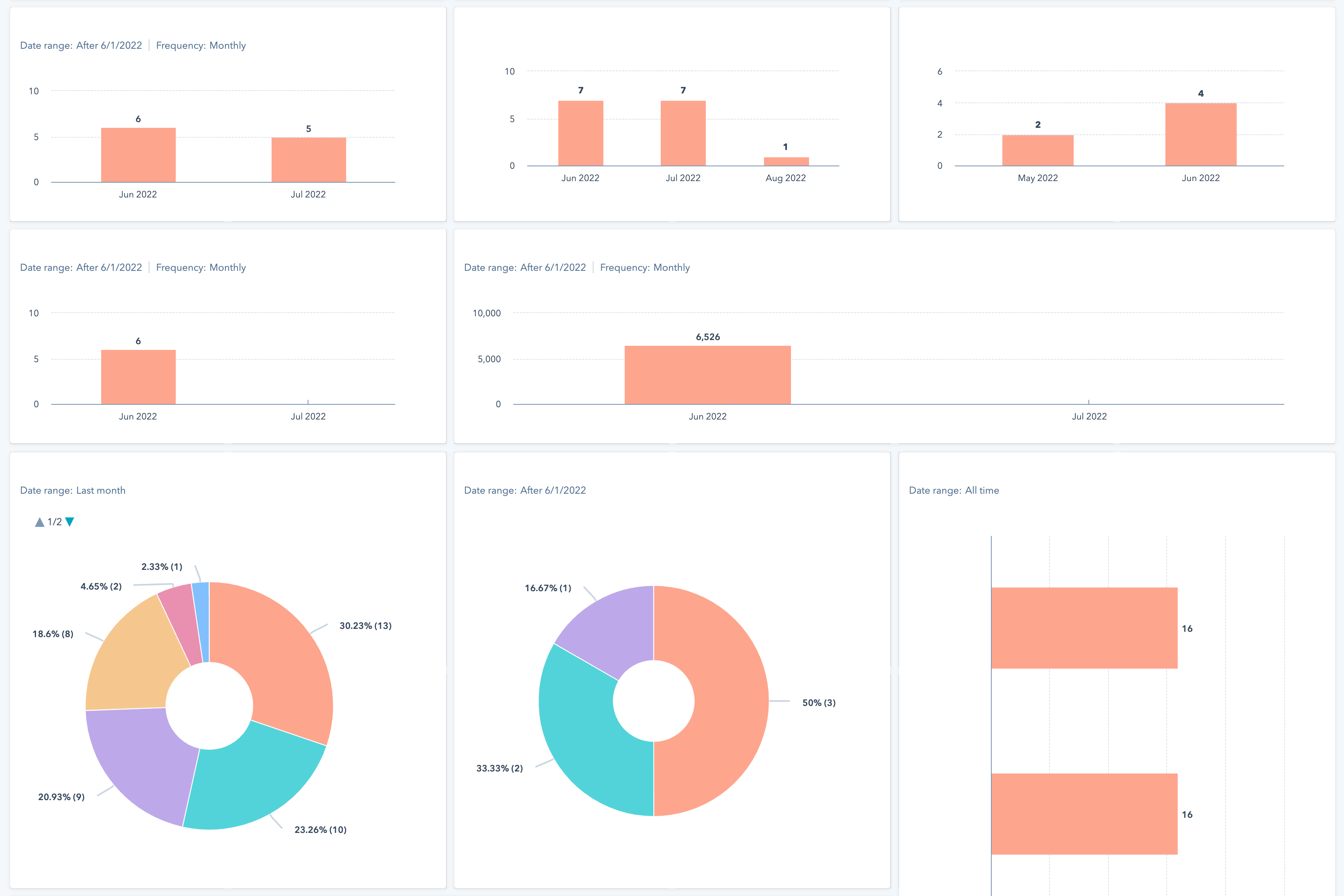 Once we had all the objects, properties, and reports mirroring correctly between HubSpot and Salesforce, and the client felt comfortable running everything natively in HubSpot, the final step was simply to turn off the HubSpot-Salesforce integration.

Now everything going forward would live natively in HubSpot. Our client then reduced their Salesforce subscription to a bare-bone single-user account for one additional year as a backup just in case, but so far they have not needed it.

The biggest benefit by far of migrating from Salesforce to HubSpot is the ability to track sales back to the marketing activities and channels - even down to the specific ad campaign that eventually resulted in a customer.

This is a result of all the sales and marketing objects and data living in a single system in HubSpot, rather than being spread across multiple disparate CMS systems, plugins, analytics tools, and CRM tools.

We are getting closed-loop campaign -> contact -> deal data in a way that we never were able to before, and we are using that to now build out much more targeted and accurate campaigns and content. We are excited to see how far we can now run with these new superpowers!