The Client: A Cyber Security Trailblazer 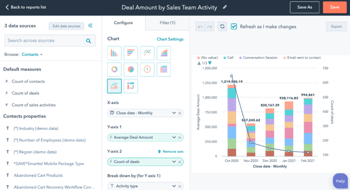 When it comes to cybersecurity, our client takes a prevention-first approach. This multinational company uses deep learning in order to prevent malware and cyber attacks rather than waiting until the damage has been done to resolve the issue. Their software can alert you to a threat 750x faster than the fastest ransomware can encrypt your data. With cyber security threats growing in frequency and severity, their team is working non-stop to provide better services for its customers.

This client has been a long-time HubSpot user. Their processes are deeply ingrained, and its software and they make ample use of its automation features. In addition, they have a Salesforce integration that allows deals and contacts to be synced between their sales and marketing teams.

The company had set ambitious growth goals for itself and was preparing to ramp up its processes in order to meet them. To do that, they would need to ensure that their systems were running at full efficiency and taking advantage of everything they offered. With their team already working at full capacity, they knew they'd have to enlist some help.

All Hands on Deck

To meet their ambitious growth goals, this company needed their team to work at total capacity with what they do best. Sales teams needed to perform at a high level, leaving little time to focus on maintaining software and integrations.

However, this doesn't mean that their software needs would simply go away. Integrations between Salesforce and HubSpot need ongoing maintenance. The current individual managing data and integration health was also responsible for training all of their salespeople who served three different countries. In addition, she was responsible for the company's marketing, process documentation, and operations. In order to improve the health of their data and integrations, she would need an extra set of hands.

Until this point, the client managed data and sync errors reactively since it would take a substantial amount of effort to correct the underlying issues. Instead, the team fixed each error resulting from these issues manually as they occurred to continue with the necessary operations for that day. These errors led to graver issues, like deals getting lost in the handoff process. Though they had a steady stream of leads, errors in the HubSpot Salesforce integration and outdated info kept sales team members from properly nurturing them from proceeding.

Fixing the company's sync and data health issues would be a massive undertaking. When faced with the decision of hiring an internal team member or working with an agency, they decided that an agency's level of expertise and available talent was the better option. ClearPivot's distributed team also meant that someone would always be available in their time zone.

The next step was to outline the challenges that had to be overcome. One of the main issues stemmed from the contact records synced between HubSpot and Salesforce. One area that was particularly challenging was the location fields. Salesforce only accepts certain formats for states and countries, so any record that included an abbreviated state or country's name would create an error upon syncing. A similar error was preventing company size filters from syncing. So many records were being held up due to sync errors that the sales department started to worry that they lacked potential leads for sales.

In sharp contrast to the reactive approach the team had been using, ClearPivot traced the sync errors to their source. Then, they changed the input criteria for data synchronization to stop future errors from happening. Then, they updated the remaining records affected by the previous errors to ensure that the sales team had a complete view of their leads.

In addition to the sync errors, previous sales representatives had left the company and their user profiles on Salesforce were not deactivated. The deals that they were working on fell out of the pipeline. Other sales representatives could select them if they wanted to. However, this meant that the handoff process was dropped, leads were not getting worked, and the company was losing potential business. ClearPivot created a report to identify deals with no contact assigned. They cleaned out the user profiles of the sales team members that had left and ensured a transparent process to prevent future lead handoffs from being dropped.

Though it was a tremendous undertaking, the results of this project made it well worthwhile. The sales team was struggling with a never-ending stream of duplicate contact records. ClearPivot reduced the company’s duplicate contacts from 2,000 to 0. In addition, the sales team had to work through a daily queue of 710 contact records to fill in missing data and keep the input consistent. However, this wasn’t as simple as copying and pasting data. Some of these contact records required extensive effort to find and input the missing information, including phone numbers, emails, and company information. ClearPivot’s team took on the challenge and reduced the sales team’s daily data cleanup queue from 710 contacts records to 0.

The client also relied heavily on automation to power their operations. During their preliminary calls, ClearPivot spoke in-depth about what the client needed their workflows to do to support their operations. With these notes in mind, the ClearPivot team audited 945 of the company’s HubSpot workflows. They then cleaned and organized to address the needs of the client. With the Salesforce and HubSpot integration, sync errors prevented leads from getting worked in sales. Vast amounts of information were getting lost in sync errors. Overall, ClearPivot resolved 827 errors in total from their Salesforce HubSpot integration.